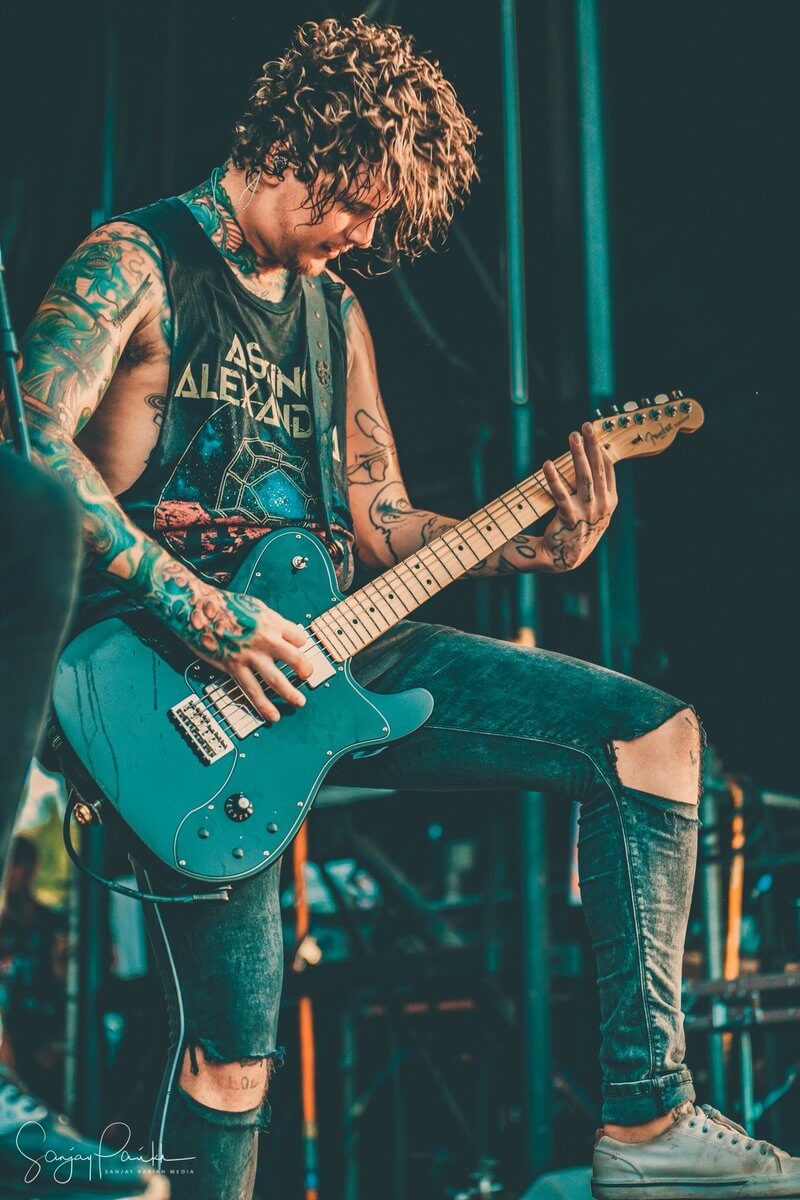 Ben Bruce is a celebrated musician and songwriter. He is the lead guitarist and co-songwriter of the metalcore band Asking Alexandria. Ben Bruce favors a plug and play music setup. Wish to learn about the guitars and amps that make up his instrument rig?

You’ve come to the right place. Read on below, and we will tell you the guitars Ben Bruce uses, the amps that are part of his gear rig, and low-budget alternatives for the same.

Once we’re done, we will also be discussing more the guitarist’s musical origin, inclinations, and inspirations.

If you want to learn to play guitar like Ben Bruce, check out my favorite resource – these lessons here.

Of all the guitars that Ben Bruce has used in his career, the custom made Ibanez guitar – Ibanez BBM1, crafted according to his specifications, is the most compatible with his playing style.

Produced in Indonesia, the BBM1 is styled after the Fender Telecaster-inspired FR Series. The guitar model was introduced in 2013 alongside the CLM1 for Bruce’s bandmate Cameron Liddell.

The guitar’s body is crafted from mahogany, and the neck is maple built. The 24 fret rosewood fretboard has dot position markers. Features of the guitar include – dual Ibanez Infinity humbucking pickups, a kill switch which is mounted above the fretboard on the body, and a Tight End fixed bridge.

The convenient position of the kill switch allows the guitarist to mute the instrument’s output at short notice. Ben Bruce has signed a certificate of authenticity for the guitar, which is included with every sale of the product.

Bruce has complimented the guitar on several occasions, saying that it is among the most comfortable guitars he has ever played. He has also said that a huge part of sounding great comes from feeling great, and when you have the Ibanez BBM1 in your hands, it’s difficult not to feel great.

He famously said that the BBM1 “sings like Michael Jackson and plays better than an athlete on steroids.” The BBM1 guitar lets you switch between clean and warm tones and heavy distortion.

Ben Bruce’s signature guitar though, was discontinued from production by Ibanez in 2015. No new signature guitar model has been crafted for the musician. If you’re keen on trying to acquire a Ben Bruce signature Ibanez though, you could still try out re-sale outlets and second-hand deals.

The guitar isn’t just a delight to play. It is also aesthetically pleasing. The model features a graphic representation of the Union Jack on its body and its Cosmo black hardware means it is always stage-ready.

The dual-coil pickups mentioned before are connected to a 5-way switch, so you have access to a wide range of sounds at your fingertips. Apart from the kill switch, there’s also a master volume control on the guitar’s body, for the guitarist to adjust the instrument’s sound as he/she pleases.

Finally, the guitar’s 24 jumbo frets make it incredibly comfortable to play, so that you do not slip up with your guitar playing onstage.

Apart from the Ibanez BBM1, Ben Bruce has played a number of guitars on his shows worldwide and for his studio albums. What are these other guitars? Let’s find out.

The solid-body electric guitar from the house of Gibson celebrates the guitar manufacturing company’s 120th  anniversary with some desirable upgrades. The guitar has a mahogany body and a figured maple top. It allows for modern-day weight relief.

The neck is round-shaped for comfortable playing, enhanced by its bound rosewood fingerboard, which has undercut frets over the binding to enable extra playing surface.

It also sports a min-Etune system, max grip speed knobs, Graph Tech nut, and chrome tune-o-matic bridge. The min-Etune offers the player 12 popular automated tunings and six programs to choose from. Of course, they can also adjust the tuning manually shall they wish to do so.

The Fender Standard Stratocaster is another guitar that has been used by Ben Bruce in his career as a professional musician.

It is a six-string electric guitar with classic design and modern functionality. It retains the original charm and character of the Stratocaster prototype designed by Leo Fender. The lightweight guitar offers a range of tones. The polyester body makes it durable, and the fretboard, made of Maplewood, gives a tight bass response.

The guitar’s neck is C-shaped for added playing comfort. The three single-coil pickups on this instrument help reproduce authentic vintage sounds. Be it rock, blues, or pop – the Stratocaster molds into any kind of music and makes it better!

Any stage-performer knows the worth of a good amp. How else will they make the audience sway to their riffs? If they happen to be an electric guitar player, amps are a must.

Metal and hard rock musicians understand how an amp can make or break their performance. Ben Bruce is no stranger to this. He’s used a whole variety of amps in his musical career. We’ll be taking a deeper look at a couple of these.

The 6505 series celebrates 40 years of Peavey amps. It features six 12AX7 preamp tubes and four 6L6GC power amp tubes. It also makes available options for presence and resonance control as well as a three-band EQ for taming their tone. Its tone, reliability and sheer power make it a go-to amp for heavy metal and rock musicians.

Ben Bruce’s primary amp, the Peavey 6534 Plus is a successor of the 6505 series. It is a two-channel, 120 watt amplifier with EL34 power tubes. The high gain and legendary tone associated with Peavey is abundant in this amp.

You will find none of the distorted noise of high-gain tube amps here. Infact, the amp’s Rhythm channel is able to retain saturation nicely while cleaning up the sound well.

You can also enjoy foot-switchable effects loop and preamp output with this amp.

You may not be able to purchase all of the equipment that Ben Bruce uses on his Asking Alexandria performances. However, that should not stop you from playing the musician’s songs.

There are several instrument offerings that provide much the same sound at a more affordable pricing. Here’s a list of suggestion for guitar and amp alternatives that you can acquire for a lower price –

The guitar’s mahogany body and rosewood 22-fret fingerboard is like any other Les Paul guitar. It has a 700T and a 650R pickup delivering the original Les Paul sound. Stringed with D’Addario 10-46 strings, there isn’t a better electric guitar you can get your hands on, for so cheap!

Squier is an entry-level Fender with the same tonal quality. Its alder body makes it lightweight and c-shaped neck makes it comfortable to play for long durations.

The guitar model has two single strat pickups and one humbucking bridge pickup. It also offers five-way switching and a master volume control. You get Fender’s typical fat sound without emptying your wallet!

The MG30CFX amp belongs to Marshall’s economy amp series. Perfect for low tones and bass-friendly as they come, you won’t have a problem playing metal with this amp.

The amp offers you three modes to choose from – Clean, Overdrive I and Overdrive II. Select Overdrive II when you want mayhem at the studio. You can tap into both heavy distortion and smooth clean sounds with this amp. It also has a tap-tempo button and onboard tuner.

You can avail the following processor options with this amp – volume, gain level, overdrive select and ISF EQ. If you’re planning to buy an amp to enhance your distortions, the Blackstar HT IR is the amp for you.

The overdrive selection mode gives you a nice and heavy sound, perfect for playing metal music. The amp is a good budget investment for metal musicians looking to practice at their homes or with their band at a garage.

Its tube power at the pre-amp and post-amp levels make it sound louder than its one watt volume allowance.

While the gear above may not be able to rival Ben Bruce’s gear, they will be able to make much the same sounds, if you know what you are playing.

Practice away at these instruments and one day, you may be able to step up to the gear Ben Bruce uses. Maybe you, too, would have your own Signature guitar model someday! 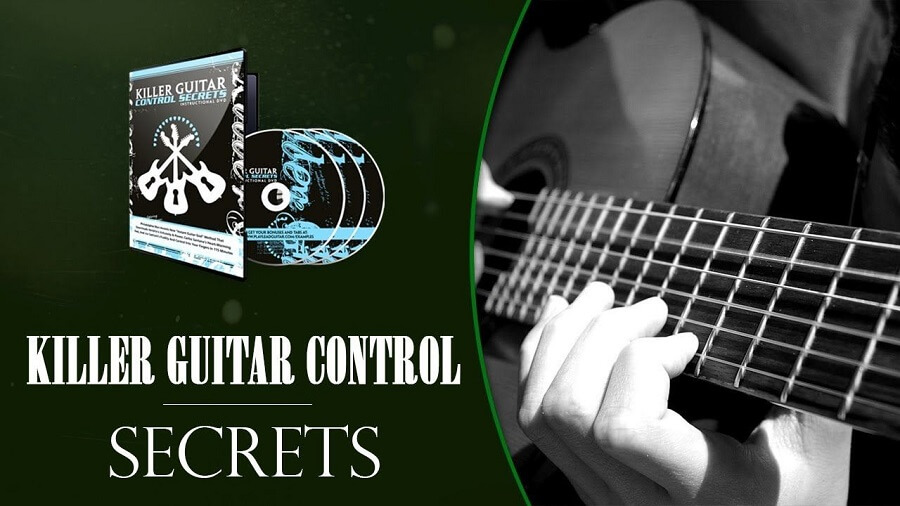 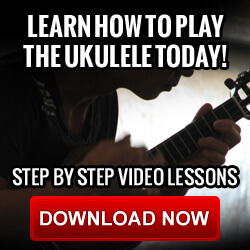